Landlocked Mongolia provides our riders an astounding adventure. It has it all – open plains, snow-capped mountains, 1000 year old history, and so much more. Stay in the same gurs that the nomadic Mongolians reside and sample their national cuisine. Go fishing in the Black Lake of the north and visit the eagle hunters of the far west.

Our ride date (June/July) allows us to attend the second oldest games in the world – The Nadaam Festival where the country comes together to compete in archery, wrestling and riding.

For those who have the time, we extend our adventure with 3 days discovering Beijing hotspots including a hike along the old part of the Great Wall. And do the ride on well maintained KTM’s. 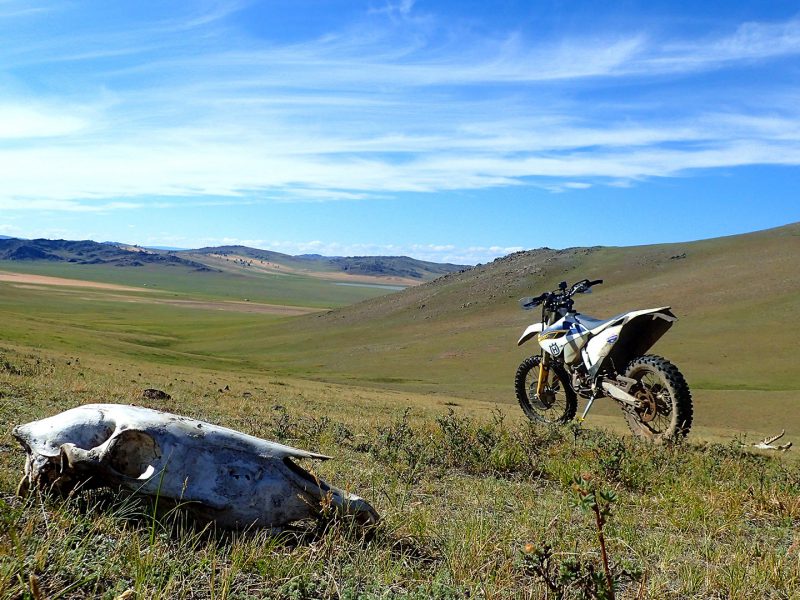 from $3,200 (USD)
Join Mid Life Adventures on Royal Enfield ‘Himalaya’ Adventure motorcycles to explore the land of Temujin (Genghis Khan) where vast plains meet the sky and where the nomadic life is still a living tradition. Our tour starts with a two day tour of the ‘best of Beijing’ including the Great Wall and Forbidden City then…
Adventure Ride

Mongolia a country with endless stretches of dirt road. A rugged terrain with an amazing back drop of mountain ranges, a unique place that provides that magic feel of remoteness many adventure riders seek. Aside from the natural beauty of the countryside we also saw an interesting variety of wildlife ranging from Golden Eagles to domesticated Yaks and everything in between. The Mongolian people we met were generous in showing us their way of life, and in sharing their stories and local foods. Again, MLA managed to stitch together a group of quality individual which made the overall experience even better. Thanks for another wonderful ride.

On an MLA Tour, it goes without saying that you are going to witness an abundance of amazing scenery and experience some very special moments. There is an endless feast of scenic beauty from wide open valleys, back dropped by spectacular mountain ranges ever-changing in their beauty by the movement of light reflecting off their rugged surfaces. Incredible inland lakes that seem to go forever, majestic rivers, streams and waterfalls at times lined by century old pine trees. The nightly accommodation in quaint, cosy, girts is only surpassed by being embraced with open arms into the homes and lives of authentic Mongolian nomads. You will ride yak, shoot arrows, handle a giant eagle, even toboggan off the great wall of China, and so much more. This brings me to the Hidden Treasure. The thing that self generates and permeates the entire group. There is an early comradery that soon develops into a feeling of true mateship, knowing someone always has your back makes the whole experience worth it on this alone.

In June 2017 the adventure of a lifetime presented itself to ride dirt bikes across the unspoiled lands of Mongolia with two known and seven highly referred blokes. To add to the adventure we were provided with the opportunity to visit some of China's great wonders on the way. To say the group clicked and the atmosphere was that of long known friends was understated. From serious discussions on our surroundings to continuous humour and banter with a genuine bunch of blokes, this adventure was, without doubt, all it was stated and so so much more. I have made some great new friends and furthered existing ones, seen wonders and made memories that will live with me forever. This adventure was so great I have committed to another and am looking forward to another journey to the unknown with some old and some again new like-minded individuals to Nepal and the Upper Mustang region in Nov 2019. I am sure the next 12 months will be like the last, the wait will seem like forever and the journey will be fully packed with greatness from one end to the next and it will be over before I know it, but, I wait in anticipation for the journey. All the best to all the people that made this journey such an amazing experience!!

If you are thinking about going on the motorcycle adventure ride of a lifetime do not hesitate to join MLA on their adventures, you will not be disappointed, as I have been on four tours now and every time I have had the time of my life and have memories for a lifetime , I have ridden places I would have only dreamed about riding without taking action and booking the adventures , I have ridden in Cambodia, Thailand , New Zealand , and Mongolia each destination with something different to offer , one thing that stays the same is the mates you meet and the comrades they become and lifelong friends they become as well , you build this bond over the adventure as some situations arise over these trips where you rely on your buddy and buddy's to help you through a difficult situation , whether it be a difficult creek crossing or retrieving your bike from over the edge of the track (Lars) hahaha! Thailand or just a drink or two or three or four..... five there will be a mate there ready to go, I met two new mates on the last trip which was to Mongolia Nev and Goldie, which are Bens mates from WA, this was in Sydney airport we met then we ordered big Heineken beers at the Heineken lounge bar and that was it the tour had officially began for me, some new mates, beers under our belts and off we go, yeah! Ha! at this point any worries or problems you may have are going to be left far behind as those big engines roar and push that big bird into the sky and you head for a faraway land for extreme adventure, and another new fascinating culture, with a bunch of buddy's looking forward to the exact same things, it is hard to describe this feeling. Mike and Bob with assistance and support from local experienced tour guides , on each tour make for a well organised and mostly smooth travels I say mostly as when travelling there can always be something that can change the best laid plans as we all know, a flat tyre, weather , plane delayed etc but no matter what happens it becomes part of our adventure , we end up having a beer and a laugh about it at some stage, on these trips your either riding a motorcycle having an absolute blast racing one of your buddy's pushing each other to the absolute limit and beyond , drinking beer and laughing , eating really nice food , meeting the locals seeing sights you have never seen before , basically from start to finish it is a blast, I feel honoured and blessed to have been on these adventures, and can't thank these guys Mike and Bob enough for everything they do to organize them, I call these guys living legends and you will too when you meet them , some quotes from our trips (why? because we can ) (more of everything ) and Hi buddy, I just wanted to add something to the little piece I wrote to you and it's the bit about Sydney airport and it wasn't just Nev and Goldie I met, I met Rob for the first time and Bob was there and Ben and Ant then met up with you and Lars and Ziggy so it was the whole crew leaving from Sydney

Privilege - it’s a word that is used loosely and in most cases without true meaning or substance. It is used as a throw away word in a comment towards those whom we see to have something that we see them not worthy off But by true definition of the word Privilege :- To have opportunity, advantage, licence, pleasure. A right benefit or experience enjoyed beyond the advantages of most. And let me tell you I feel I’m Privileged. Privileged to live the life I do Privileged to travel to some of the most remote lands on this planet meeting the people I do Privileged to building relationships with extraordinary people doing extraordinary things Privileged to be able to do that in a manner I love to do which is on 2 wheels, in whatever format Privileged to be able to do that with some fantastic fellow riders And last but not least…. Privileged to be able to work with Mike within MLA structure to deliver these exceptional experiences and adventures I/We had and exceptionally Privileged trip through Mongolia with Buddhi and his team. Personally, thanks to all for being a part of that and being part of the stories I’ll be telling for many year to come. As you may know I want to be in the nursing home years from now telling the stories, NOT listening to them Stay and ride safe and hopefully I will see you on another MLA Adventure very soon.

I’m no Mark Twain, but here’s a few words. This was a truly amazing experience, and I am extremely grateful for the opportunity and look forward to many more with you guys, if you’ll have me. I signed up for the MLA Mongolian tour 2018 with pretty much a "screw it lets do it" attitude, with little knowledge of Mongolia other than their nomadic existence and the fact China built a big ass wall to try and keep them out for hundreds of years. Words can barely describe the amazing experiences I had with the endless rolling mountains, valleys and trails, and the ever changing landscape from desert trails to tree lined muddy tracks. Throw in some dunes, teeth shattering corrugations, gruelling solid riding days to test your grit to make for a fantastic adventure. With a welcoming, eclectic and fun MLA crew that quickly bonded, a fantastic support crew and warm welcoming local nomads that enjoy a simple and ancient way of life that has largely disappeared from Western civilisation, it was a truly humbling experience. I am so grateful for this experience which I will cherish for a lifetime, and look forward to many more with this unique and amazing MLA crew into the future!